A CyanogenMod 12.1 snapshot build is finally here and we can sigh in relief at last. Many-a-user has already moved along to the Marshmallow nightly builds whereas some still prefer the more stable ROM versions which are still based on Lollipop. It has been two months since the last snapshot build was released, but things are starting to pick up again.

CyanogenMod snapshot builds are the closest to a stable release you can get. They should have fewer bugs and imperfections and the best hardware support. Because they are more stable than nightlies (which are launched every now and then) snapshot builds take longer to be released.

The build has been released for some Motorola devices such as the 2013 Moto X, the Moto Maxx and the Droid Ultra/Maxx variants. Support for more devices should arrive soon.

Motorola is not far from the competition when it comes to timely updates. This time, when we are eagerly waiting for Android 6.0 update announcements to be made, Moto has us covered in disclosing a list of devices that are getting the update.

Motorola even highlighted some things that the users can use as soon as their Motorolas get up to speed with Marshmallow. This includes Doze Mode (the feature detects if your device is inactive to save battery life), Direct Share (you share files, photos, videos, links easily), and Android Pay.

It was announced that the Moto Enhancement feature will be working with Marshmallow. Some of the features removed from the device software are Moto Assist, Moto Migrate and the Google Chrome extension in Motorola Connect.

There is no news regarding a possible date of release for the Android 6.0 update, but Motorola assures their customers that they are working on it as fast as they can.

The Xperia Z3 tablet is getting official CyanogenMod support starting today. In order to get it, all you have to do is get over to CyanogenMod and find scorpion_windy.

Apart from the new support, DROID MAXX users can be happy to know that nightlies for obake are being worked on again. They will find two new files available for download as well. Last September CyanogenMod announced that they no longer have a maintainer, but it seems that that issue has been resolved now.

The current nightlies are stable, but they may also cause problems for some devices, which means flashing is a choice only you can make, fully knowing you may damage your device in the process.

Verizon has a new offer this Black Friday, and it seems that you can get $100 off for every on-contract Android phone you buy plus $150 bill credit if you switch to Verizon from another carrier. It appears that some people actually may want to get into contracts with the big red streak.

In order to get most Verizon devices all you have to do is go to Verizon or Amazon. Some device examples are Droid Turbo reduced to $99 and Samsung Galaxy Note 4, which was $299 at launch and can be bought with $199 now. 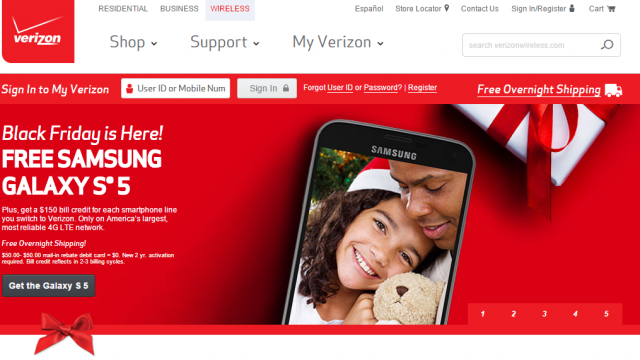 The most attractive offers are Samsung Galaxy S5, Xperia Z3v, Droid Maxx and 2014 Moto X that you can get for free with substantial contracts, of course. On Amazon you will find the HTC One M8 at $0.01.

Be sure to get just the device and contract you need before signing that two-year contract.