Sago Mini Space Explorer is this week’s free family –friendly Google Play Store app. This week’s little freebie is aimed at children and it proves to be a funny experience for most.

This little experience lets children guide a dog in a spacesuit through space. Everything is done in a fun and colorful manner and the little ones can explore and learn as they play.

The game can be found on the Google Store and you can usually get it for $2.99, but for the next 5 days you can download it for free. You can click on the banner you can see in the Store, enter the code SAGOSPACEFREE, or follow this link.

Sago Mini Space Explorer is easy to install on your tablet and it will definitely be a great distraction for your little ones. Or, you know, you could enjoy driving a lovely funny pet into space by yourself, we don’t judge! Amazon Appstore is giving free versions of its favorite apps again! This time we’re talking about 27 games and useful apps worth $135 you can redeem until 12pm IST September 27th.

In order to get your favorite games and apps for free, all you have to do is get the Amazon Appstore HERE and install it on your mobile device and then browse this weekend’s deals. You can also follow THIS LINK and you can enter your Amazon account in order to redeem the apps directly from your PC or laptop. 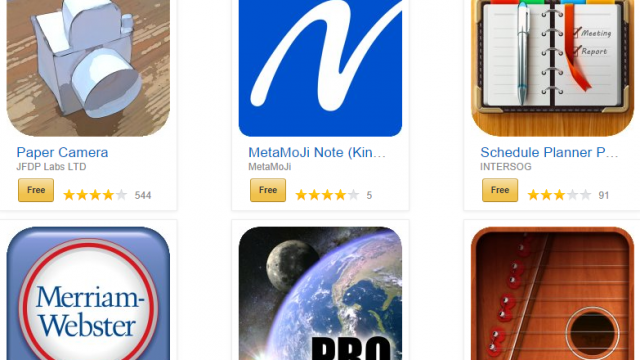 Wear-a-Tron is a new free app made via a crowd-founded event and resulting in a smart door lock that lets users control their door locks via smartphone. That is not all, as the new Wear device can be included in the mix as well! Now the app can activate the unlocking function of the Lockitron with the help of a Wear extension.

The Lockitron app allows the user to log into his or her company server and choose which lock to access in order for it to be controlled via NFC, WiFi or Bluetooth. It uses the app API to send an unlock code from the user’s phone to the desired lock. The Wear-a-Tron allows users to give limited guest passes to friends so that they can unlock a specific door with their own phones. Some new and interesting features are being worked on at the moment, one being a geofence that activates the app when the user is getting close to his or her front door.

Wear-a-Tron is available for free on Google Playstore and you can check more about it below!

The Google Play Store is cleaning its closets it seems, as older versions of HTC, Samsung and Sony smartphones are being pulled off. After Xperia Z Ultra, Galaxy S4, HTC One M7 and LG GPad 8.3 were out of stock on Google Playstore, Z Ultra, G Pad and HTC One M7 were pulled off as they no longer appear on the device section.

On the Google market you can still find the One M8, Moto G and the Galaxy S4 which is still out of stock. There are rumors that a new Samsung Galaxy S5 GPE will come on the market soon, but there is still no sign of it online.

Considering the rumors about the impending Android Silver program replacing the Nexus line and a possible final Nexus tablet, the little devices we get on the market can be a sign of change and finalization of the Google Play Experience.

App Config free is a new free piece of software you can use to configure system settings to automatically enable and disable when needed. You use mobile office suites and don’t need Wi Fi enabled, but you might want Bluetooth enabled to connect to an external keyboard or mouse or you may want to stop the screen timeout while you write or watch some videos. Maybe you stream videos all the time and need a stable Wi Fi connection and brighter screen. This little app might be the best solution for you, so that you won’t need to use Tasker to set up different profiles you have to manually change when you do stuff with your mobile device.

App Config Free was made by a XDA developer named aaro that allows users to define settings on a per-app basis. When it is launched, the users get a list of installed applications and by clicking an app, users will get a menu where they can modify a series of existent settings. Among possible modifications are Bluetooth, Wi Fi and mobile data settings and sleep timeout, orientation and screen brightness.

App Config free creates a notification that launches a configuration page for the current running apps when clicked on. Basically, it is a very useful app that works well with any power user. You can find the app free of charge on the Google play store.