Xiaomi Mi Pad 2 is a new tablet coming from this Chinese manufacturer, and it was shown off for the first time earlier this week, along with the new Xiaomi Redmi Note 3. This is an upgrade from the previous Mi Pad device, a 7.9-inch tablet launched a while back.

What makes Mi Pad 2 so special? Well, for starters, its price! This tablet will sell for $156 in China, where it is available at the moment. It looks pretty good for a cheap Android tablet, but it has nothing out of the ordinary aesthetically speaking. There is one thing though, you can upgrade the storage space from 16GB to 64GB (this model sells for $203) and this model will also let you choose between the Android OS variant and the Windows 10 one. Although many may want to try the Windows 10 interface in order to be able to stream Xbox One games from the living room, most still prefer Google’s mobile alternative because of its functionality (and lack of keyboards or styluses could factor in).

HTC’s event is only a week away and this year’s flagship is bound to make its appearance on March 1st. HTC One M9 was reportedly leaked a bunch of times these past few weeks and some of them may have been right. Some renders and full specifications have also appeared on Cyberport.de, as AndroidPolice reports, and below you can find out just a bit more about one of the best smartphones of this year.

Below you can read about the most important specifications known so far:

There are some new photos with the HTC star you can see, one where it’s clad in gunmetal grey and one with gold on silver. The designs are rather similar and they look much like the former models.

It is very possible that this is not a real render and the specs could be fake as well, but most information points out to the fact that these are indeed real news.

Whether this is real or not, we will know for sure in one week, at MWC in Barcelona, where HTC’s main event will definitely show the world one of the best flagships of 2015.

Sony SmartWatch 3 is the newest product you can buy from the Google Play Store starting today! The device has been available on the platform since mid-October, but it was marked as coming soon. Now, that wait is over and you can get yours for $249.99.

The smartwatch is destined to fitness-loving folks and design-wise it has a metal frame with a luxurious feel. Inside, you will find a 1.2 GHz quad-core ARM Cortex A7 processor with 512 MB of RAM and 4GB of storage. The display is 320 x 320 and rated IP68 and all of the above are powered by a sturdy 420 mAh battery.

Smartwatch 3 is the first Android Wear device to ship with a GPS chip available, which means it may take advantage of it in the next platform version. The device is only available with a black strap at the moment and, if you don’t mind the lack of choice, you can get yours on your wrist in just a few days!

Samsung Galaxy Note 4 Duos was recently spotted in China and the device seems to be available in no less than three versions, two corresponding to the different Chinese carriers and one that is a SIM-free version.

The SIM free version is said to be compatible with most 4G carrier networks and it sells for around $880 US dollars.

Galaxy Note 4 Duos has a quad-core 2.7 GHz Snapdragon 805 processor with 16 GB of storage and a 3000 mAh battery to keep it all together.

Galaxy Mega 2 will be coming to AT&T on October 24th, and its price might amaze you. The market may be full of phablets, but then there’s  this big chunk of tech! This device is larger than even the Note 3, and it presents itself as an option for potential customers who want something big without paying a ton of money for it. 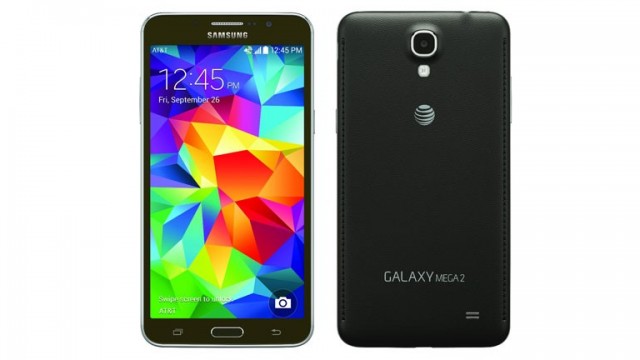 This entire year was full of devices that bragged about being a bit bigger than their last year counterparts, but in Mega 2’s case, the size is a downgrade. It had a 6.2” display last year, but the 2014 version slimmed down to just less than 6”. Resolution remains HD at 720 x 1280p, and the primary camera still has an 8 MP sensor.

Hardware speaking, Mega 2 has little updates to the 2013 model, retaining the quad-core processor and downgrading its battery to 2800 mAh.  Its design is completely changed though, as the device now has squared-off corners and faux-leather back, which makes it look much more like the current Galaxy devices.

Samsung Galaxy Mega 2 does not compete with the flagships of 2014, but is not a shabby device to look at and use, especially if you want a phablet at a smartphone price!

Nexus 6 is finally available and, as you know, it will be running on Android Lollipop. The device will start pre-orders on October 29th and the starting price is $649.99. Nexus seems to be too big to be stopped, now more than ever, as the device is heading towards the phablet section faster than any other!

The new Nexus was manufactured by Motorola, now owned by Google, and the design details are mostly the same, but a little different. The power and volume buttons are situated a little bit lower than on the Nexus 5, more on the middle-side, and the edges are a bit more curved as well, making it similar to the Moto X edges.

The codenamed Shamu has a strong hardware spec as well:

Shamu will be sold with Android Lollipop of course, and it will be available for pre-order starting October 29th. It will become available in stores sometime in November. Off-contract, Nexus 6 will have a price-tag of $649.99 for the 32 GB version and $699.99 for the 64 GB version (bear in mind there will be no microSD slot available). It will be immediately available on the Google Store, AT&T, Verizon Wireless, T Mobile and US Cellular.

Google’s device will be available in Cloud White and Midnight Blue color options. It will have support for Qi wireless charging and access to Motorola Turbo Charging where 15 minutes of charging will last for 6 hours of usage.

It appears that Nexus 6 will not be replacing Nexus 5 completely, as the previous flagship will continue to be sold as a smaller option.