OxygenOS will not get its Android 5.1 update until the OnePlus 2 is released, but the new Cyanogen OS will be coming much sooner. After the rather violent and unexpected breakup between OnePlus and Cyanogen Inc., the former managed to release its own Oxygen OS ROM for those who already bought their devices, but their updates will be coming slow, new reports suggest.

The OnePlus 2 has not shown its face so far, but it has been officially mentioned a few times, which can only make its descent closer and closer with every passing day. This will be the first device to operate solely on OxygenOS. A new build of the ROM will come live soon and this should fix the touchscreen issue OnePlus One users have been having, but don’t expect a bump in the version number.

On the other hand, Cyanogen is moving along with the tests of Cyanogen OS 12.1 – Android 5.1 version – and it is waiting for Google certifications. The OS should be available for download “Soon”.

Note: do not confuse Cyanogen OS with CyanogenMod, the open source ROM we all love.

Google open sourced its I/O 2015 web app and this time you actually get some interesting functionality out of it. Each year after the conference the app is open-sourced in order to show its design suggestions and functionality on Android, but this year things will be different as the source of the app will be released for examination. Ioweb2015 is already available on Github if you want to grab it.

This intricately-designed app is mobile-first and offline enabled and some of its more important features are the polymer material design, the web components, the push notifications, the service worker, add to homescreen, google sign-in 2.0 and the web animation APIs.

Developers can relish in the knowledge of this app’s source code and you can do so too if you wish by accessing the source link below.

Android Lollipop 5.0’s source code is now available on AOSP. It seems that no Google Android update is complete until it reaches the Android Open Source Project. This means that every line of code, every config file and every resource is made public. It may take a while for the code dump to be complete, but it will be firstly worth it to most devs out there. 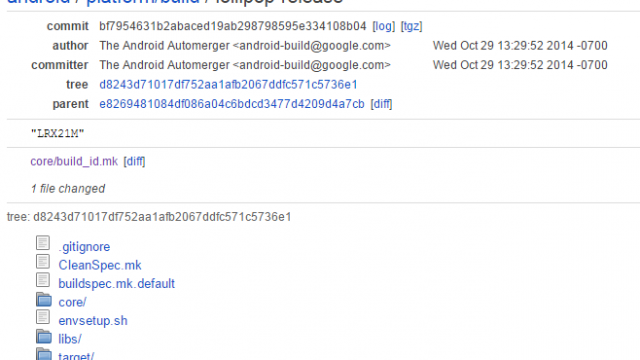 The branch dedicated to Lollipop is lollipop_release and the release tag will be android-5.0_r1. The code bears the number LRX21M and apart from this, on the AOSP you will find updates for all of the nexus hardware starting with Nexus 7 (released in 2012).

Some device repositories were added, including Nexus 6 (kernel and shamu), Nexus player (kernel and fugu) and Nexus 9 (kernel  and flounder) and you will also find a device repository named atv, which is destined for ADT-1 Android TV. Repos for the ARM and x86_64 platforms are available as well.

CyanogenMod recently released its kernel source for One Plus One, the first premium Chinese smartphone device, at the time of its final and expected arrival. The device is hyped on the market as it is released and bought on invitation and mostly because it runs on a CyanogenMod version. Its kernel source code was launched and now talented ROM developers can build standard AOSP of CyanogenMod releases.

This is the best timing for such attempts, as phone invitations are finally being sent out. People who received an invitation can now buy a device for $299 for the 16 GB version or $349 for the 64 GB version. Considering it is a good-looking phone with a decent configuration and open source software, One Plus One has become one of the most desired devices on the market.

It can be purchased on invitation only, and an invitation can be won by commenting on OnePlus forum, entering contests and promotions regarding the device or engaging with the social media team responsible for the device. People who buy their phone can afterwards send invites to their friends as well. Although the limited production number has created frustration among customers, One Plus One remains one of the most desired devices of the period.

Developers, now you have yet another help in a new website-type library. The Android Arsenal is a new categorized directory of Android-related projects that can help developers find what they are looking for much faster. The directory comprises Buttons, Changelogs, Caching, Color Pickers, Action Bars, Analytics and Advertisements among others, and it already has over 250 links to different projects.