If you love the Moto G you will love the two new versions being released this year. Motorola just announced two versions of the updated mid-range budget smartphone, which is a mix of new and old features. Most of the important elements are changed and upgraded while some of the more affordable features are left unchanged.

The new Moto G smartphones get extra RAM and more storage, plus a better camera. They retain the 2014 5” 720p screen but the tech under the chassis is a bit different, starting with a Snapdragon 410  processor. The main camera is upgraded to a 13MP snapper and the front gets a 5MP camera too. The Moto G devices also get LTE connectivity and IPX7 water resistance, which means they can last to a dive of up to a meter for 30 minutes. The devices get a 2470 mAh battery to power everything up.

The G’s will be sold on Motorola’s website to some markets and they will be unlocked. They will run on Android 5.1 software right out of the box. The G’s will also get access to Moto Maker, apart from the standard white and black variants. The price for selling them will be a third of the price of flagship ones, which puts it somewhere in the price-range of currently marketed models. The 1GB /8GB version will sell for $179 and the 2GB/ 16GB version will sell for $219.99.

Both Moto G 2015 versions start selling today, so you can get your own if you really want to change your smartphone today!

Motorola Moto G first gen is getting its Android Lollipop OTA today. It may take a few days but it will soon reach all devices out there. The 2nd gen Moto G got its Lollipop flavor in January and now its older sibling is getting the same treatment.

The update Motorola announced brings the device to Android 5.0.2, which means that Lollipop’s first bugs will also be solved. You already know what the deal is all about so go ahead and tap that update button if you can’t hold your excitement in with your Moto G!

Motorola is offering a great deal today and it’s giving you a $40 off deal of the Moto G price, lowering it to $159.99. We’re talking about the first gen Moto G of course, but it’s still packing LTE. 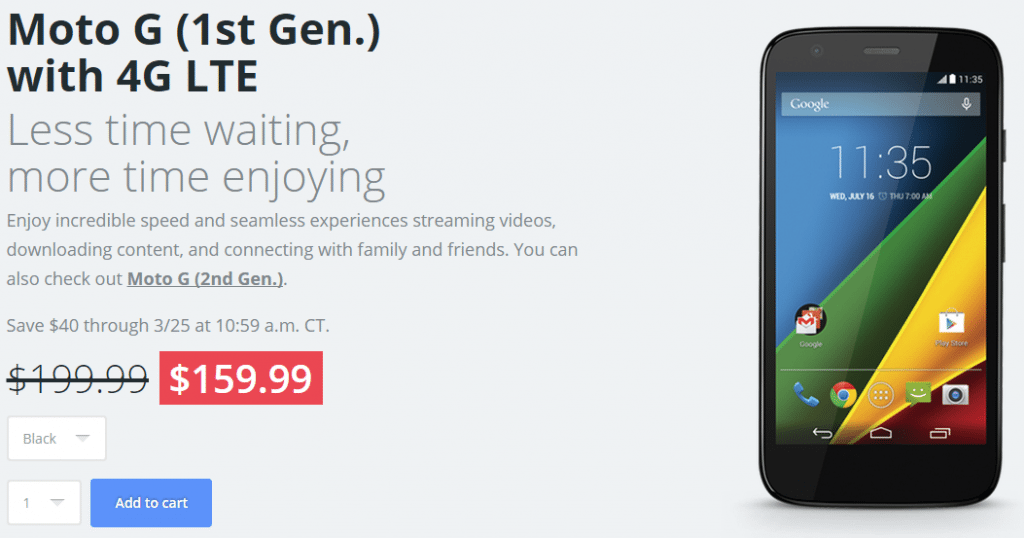 The device is a little smaller than the 2014 version with its 4.5” 720p LCD screen, 8 GB of storage plus a microSD slot and a Snapdragon 400 CPU paired with 1GB of RAM. The LTE version presents support for LTE bands as well as HSPA+ bands 0n T Mobile and AT&T in the US.

Motorola Moto G 1st gen will be available at this price until March 25th at 10:59AM CT. Shipping is free and your device will arrive sometime around April 1st. Happy dealing!

Motorola Moto G is getting an OTA update to Android 4.4.4 today. The update is being pushed to devices as we speak and what it does is upgrade users of the Moto flagship to the most recent Android version available.

The update is a bug fixer in most cases so you won’t find that much exciting news in between the lines. Among the solved problems are some security vulnerabilities and some stability issues. The update brings some interesting genuine design changes as well, including a new layout for the phone dialer and the option of pausing during a video recording in the camera app.