Samsung Galaxy Note 4 details were leaked today at GSM Arena and now we may know just a bit more about the device!

It appears that the device may be powered by a Snapdragon or Exynos Hexa processor and it will be water resistant – and dust resistant, of course – and have a pretty good 20 MP camera.

None of these details are confirmed though, so stay tuned for more!

Samsung Galaxy S5 Prime was leaked in a video and new questions arise. Apart from the video, some photos were leaked as well, and the details in each kind of contradict one another. Which one is right and what can we expect from the premium Galaxy S5 version?

The rear panel seems to be made of aluminum and it has metal sides (possibly?). The phone has an external waterproof seal and its battery panel can be removed. The phone is much thicker but that doesn’t mean it is much heavier. Some say it is actually Samsung S5 Active and not Prime.

Its screen is sharper than Full HD 1080p, and it pretty much looks like a standard model with a metallic case rather than the usual plastic one. Supposed specs are a 5.2” screen at 2560 x 1440p resolution with a Snapdragon 805 CPU and 3 GB of RAM.

Galaxy S5 Prime is supposed to launch next month. Do you believe this really is the premium S5 version?

LG G3 will be launched soon but until then photos of the new flagship keep making their way to the public. EVLeaks launched three more rendered promotional photos for the new device in which the screen is lit and we can see 1 lockscreen wallpaper so far. The display seems large enough and has a tiny bezel.

LG G3 will be available in three colors it seems: White, Gold and Grey to be specific. One interesting piece of information is the EVLeaks tweet in which we find out that the mysterious sensor on the back of the device is a laser sensor used in auto focus when the camera is used. The laser allows keeping both hands on the device during focusing so that the user doesn’t need to tap on the display to focus his device.

On May 27 we will find out more about the LG flagship and we will be able to see it in its entire splendor and pre-purchase it as well. Stay tuned for the LG event in London!

HTC One Mini 2 M8 has finally showed its face! in a leak, of course! EVLeaks managed to get their hands on some rendered photos for the new HTC Mini device and it looks a lot like the M8 flagship! One important thing is missing though: the dual camera!

The mini-device has a metallic body and retains the two front speakers but presents no duo camera on the back and no dual LED flash. We know what the specs are as well, so bear with us for a little: HTC One Mini 2 M8 will run on a Snapdragon 400 processor and 1 GB of RAM with 16 GB of storage and Android 4.4.2. It will have a 4.5” HD display and a microSD card slot, plus a 13 MP primary camera and a 5 MP front-facing sensor. The device is bound to launch in the summer and it has no price tag as of yet. Stay tuned!

Kyocera’s new device was leaked today and the only photo we can see was published by EVLeaks. There’s nothing more we know about the new device except for the fact that it looks pretty bad and it resists pretty much anything! Good bye now, Nokia 3310!

It seems the new device will be running on Kit Kat and has a rear-facing camera and 4G LTE connectivity. Its body is hardened to sustain drops and scrapes and even a run-over by an earthmover or forklift, why not!

One Plus One was recently leaked online by OnePlus forum. Until now, details and specification regarding the bigger HTC flagship have been scarce and some may have been fed up with waiting. These new photos are pretty convincing in portraying the new high-end large device.

HTC One Plus One presents some interchangeable covers made of or looking like denim, carbon fiber and wood. The device will have capacitive navigation buttons and shares an industrial design to other similar devices. 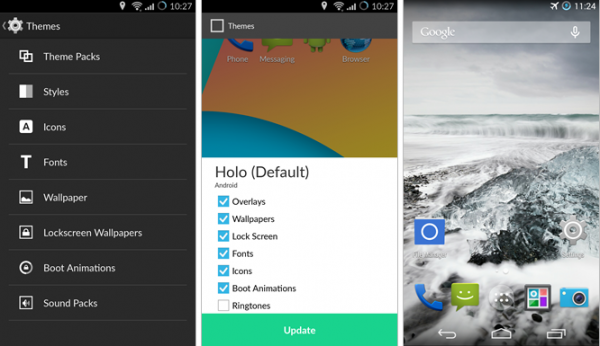 This is not all, because this new device will run on Cyanogen Mod stock software that bears the name CyanogenMod 11s. The Android 4.4 build presents custom icons and lock screens, with a theme manager as well.

One Plus One is supposedly going to be unveiled Wednesday April 23rd and it will only be available for buying with invitations and contest participations.