SamMobile recently got its hands on some photos that resemble the Galaxy A5. It seems that this device is a strange one to be cheering about as the SM-A500 is the first of the A line, a cheap-ish form of Samsung handset. It appears that the new Samsung device builds hype because of its build materials, which appear to be neither plastic nor metal, but still feels cold when held in the hand.

It appears that Samsung has some experience with building faux materials, as the faux leather backs in previous devices allowed the South-Koreans to attempt to create faux metal backs for their devices as well. 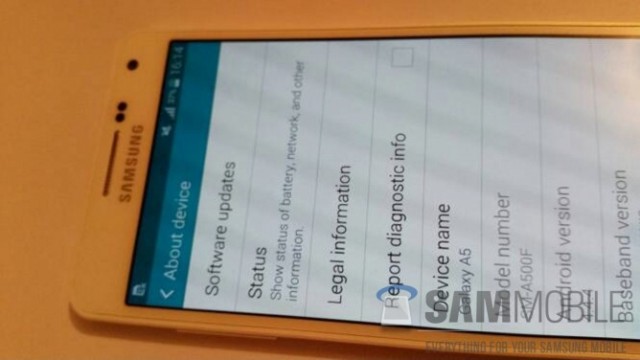 Some hardware specs have leaked as well and it seems we are talking about a phone with a 5” AMOLED display powered by a Snapdragon 400 processor aided by 16GB of storage and a 2330 mAh battery. The device is said to have a 13 MP sensor in the back and a 5MP front camera. It seems the device will be sporting the latest TouchWiz custom interface.

The leaked photos resemble those leaked by EVLeaks a while ago and pretty much with any Samsung device built in the last few years. Galaxy A5 would be the first of its line and it will be followed by two other such handsets.