A new Android Wear watch is being made and it is the fruition of a combination between Intel and Fossil. The announcement was made at the Intel Developers Conference, where Intel usually presents its new chips, but also some other things. 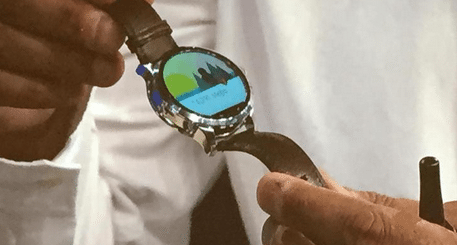 This watch was teased for a while now, and the first official image seems to point at a cross-breed between the Moto 360 and LG Watch Urbane. Fossil’s watch and Intel’s Tag Heuer device are the first smartwatches or Android Wear-friendly devices made by old-school watchmakers and not tech companies like LG, Samsung, Apple or ASUS. Fossil is said to possibly supply designs for well-known brands such as Michael Kors and Giorgio Armani.

This new Android wear watch is not the only project Fossil has going on as they will soon launch a connected bracelet and watch. It is safe to say that Intel does not want to reveal more information regarding the watch at the moment. It doesn’t have an official name or official specs yet and it is expected to launch sometime this holiday season.

That is all we know about the Android Wear watch from Intel and Fossil, but more details will be released soon. Stay tuned!

Samsung Galaxy Note 4 details were leaked today at GSM Arena and now we may know just a bit more about the device! The Note 4 is codenamed Muscat and it will probably have a large-ish 5.7” QHD display at a 2560 x 1440 p resolution with a pixel density of 515. Last year’s Note flagship had…

OnePlus 2 is the newest Chinese 2016 Flagship Killer, but is it really worthy of this title already? We shall see next year. For now, it seems that this device could be a 2015 flagship killer, if not for some of its own shortcomings. Its best features are the beautiful display with a solid build…

Verizon finally launches Nexus 6 tomorrow and it comes with Android 5.1 installed too.     If you want a device now and you want it from Verizon, you can get it for $249 on contract or you can pay $27.08 a month on Verizon Edge. Just in case you buy it before the end…

GIFs are common knowledge right now, but that does not mean they are available on every social media platform out there. Enter Boomerang from Instagram, a companion app for the Instagram platform that should redefine the meaning of GIFs.     What are GIFs?   Google’s automatic stringing of similar looking photos into one small…